Why the need for a new round of updates to the Duramax just three years after the current engines arrived? On Jan. 1, 2010, all new diesel-powered vehicles had to meet tougher federal diesel emission standards that will reduce allowable nitrogen oxide levels by 90 percent from today, 96 percent from 1994 levels.
NOx is a major air pollutant that contributes to smog, asthma, and respiratory and heart diseases. It’s a byproduct of diesel’s high combustion temperatures.
The new Duramax diesel engines are built to meet new clean-air regulations, plus they feature other key improvements in technology and capability. Like today’s Duramax, the Isuzu-GM joint venture engine will continue to be available in two versions.

“The new Duramax diesels are based on the same engines that have been around since 2001,” said Gary Arvan, a GM diesel powertrain engineering chief. “The 2500 and 3500 Chevrolet Silverado and GMC Sierra HD pickups receive the high-power LML motor [replacing the 2007-10 LMM], while the 2500 and 3500 heavy-duty vans receive the lower-rated LGH engine [also replacing the LMM]. Both have iron blocks, aluminum cylinder heads, and their [6.6-liter] bore and stroke are unchanged.”
The LML will be paired with an Allison six-speed transmission while the LGH will be mated to GM’s in-house 6L90 six-speed gearbox, which is also matched with the 6.0-liter V-8 gas engine.

The two biggest technical changes Arvan shared details about are the Duramax’s all-new selective catalytic reduction and its enhanced exhaust gas recirculation systems — which are needed to scrub NOx down to no more than .2 grams per horsepower/hour — as well as its approved use of B20 biodiesel. That’s 80 percent ultra-low-sulfur diesel and 20 percent biodiesel.
NOx selective catalytic reduction uses diesel exhaust fluid. The urea-based solution (32.5 percent industrial urea and 67.5 percent deionized water) is held in a 5.5-gallon storage tank and injected as a fine mist into the Duramax’s hot exhaust gases. The heat turns the urea into ammonia that — when combined with a special catalytic converter — breaks the NOx down into harmless nitrogen gas and water vapor.

The exhaust fluid refill point for the HD pickups is mounted under the hood of the engine, while the vans’ is positioned next to the fuel door on the side of the vehicle. The tank is mounted on the side of the driver-side frame rail.
Arvan says diesel exhaust fluid refill intervals will vary depending on duty cycle. Some customers will only have to refill during routine maintenance, such as when the oil is changed, while others will have to top off the tank sooner.
“If they’re towing frequently, they’ll [likely] have to fill up with DEF again sooner,” Arvan said.

To ensure that the exhaust fluid tank is refilled, Duramax-equipped trucks will warn the driver when the fluid is down to a 1,000-mile range. A series of start-up warnings — including lights, chimes and messages — will become more frequent until the tank is empty. If the driver continues to operate the truck with a dry tank, after a final warning and restart the truck will only operate in a “limp-home” mode that limits speed to just 5 mph until the tank is refilled.

The selective catalytic reduction and diesel-particulate filter systems depend on a diesel oxidation catalyst that’s positioned downstream, behind the engine, to start the NOx and soot-scrubbing processes. The catalyst requires high temperatures to perform. Those temperatures are achieved on-demand by the addition of a new fuel injector that’s been positioned directly behind the exhaust outlet of the Duramax’s variable-geometry turbo instead of using the engine’s eight existing in-cylinder injectors. Fuel is squirted into the hot exhaust and burns, quickly raising temperatures in the catalysts.

The LML and LGH also make greater use of exhaust gas recirculation across the Duramax’s power band than did the LMM Duramax. The system recirculates a portion of the engine’s exhaust back into the engine at a lower temperature. The cooled gases have a higher heat capacity and contain less oxygen than air, lowering combustion temperatures and reducing the formation of NOx. Exhuast gas recirculation is prevalent in today’s clean-diesel engines to reduce NOx, but it’s not efficient enough in its current form to meet 2010 emissions levels in GM’s trucks, hence the use of selective catalytic reduction also.

Power ratings play a role in how much emissions equipment is needed.
“We’ve improved the performance of the Duramax in the van to 250 horsepower and 500 pounds-feet of torque from today’s 250 hp and 460 pounds feet,” Arvan said. “We aren’t prepared to talk about the new power figures for the heavy-duty trucks yet, but we won’t let the new emissions regulations bring us down [in power]. We’ll produce at least the 360 hp and 660 pounds-feet of torque [with the LML] that we make with today’s engine.”

We think there will be a significant power bump when the final numbers are revealed.
The LGH Duramax has a smaller exhaust gas recirculation cooler than the LML motor because of its lower power ratings. It also has a smaller radiator and cooling system.

Efficiency improvements to the recirculation system include new separate cold and hot circuits that allow exhaust gas to recirculate immediately after engine startup, when engine temperatures are still relatively cool and when the engine is idling.
In addition to burning cleaner, the LML/LGH Duramax can also burn greener. It’s certified to burn B20 biodiesel, up from the LMM’s B5 rating.
“We made a lot of enhancements to make sure the new Duramax is robust with biodiesel,” Arvan said. “The engine uses our latest-generation fuel filter that includes a coalescing filter to trap any water that could be present in the fuel. The downstream injector [behind the exhaust] for diesel particulate filter regeneration means we also won’t have a worry of oil dilution with B20 fuel from in-engine post injection [like is used on the LMM diesel]. There’s also additional heating to the fuel circuit so the filter won’t get plugged from old [B20] fuel gelling or waxing.” 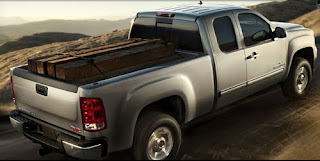 Another big change to the Duramax’s fuel system is the first-time use in the Duramax of piezo electric injectors, which can react faster to fuel demands than the old solenoid injectors could. Fuel pressures are up from 1,800 bar (26,000 psi) to 2,000 bar (29,000 psi) for improved fuel atomization and combustion control. The piezo injectors run on an all-electric circuit in the engine, which helps explains the high-voltage cable we’ve seen in spy photos of the engine.
The new Duramax keeps the same Garrett-supplied single turbo setup of the LMM Duramax, though the compressor and turbine wheel diameters and blade trims have changed. The turbo also uses the same “boreless” compressor wheel.
The Duramax also continues to use a conventional gray iron engine block, but it’s been structurally enhanced around the lower skirt to help reduce noise, vibration and harshness. Combined with a new pre-combustion fuel-injection scheme that injects two pilot injections into the cylinder before the main injection, noise levels have been reduced up to 50 percent in the 1,500-1,600 rpm peak torque operating range.
“We focused on getting NVH down in the heaviest driving points,” Arvan said.
We briefly drove a 15-passenger Chevrolet Express 2500 van with the LGH Duramax diesel under its hood. While we weren’t able to do much more than a few quick starts and stops and some city-driving route simulations, we could immediately tell the engine was much quieter than the current LMM Duramax. Arvan said the van we drove was pre-production and only about three-quarters of the way through finalizing its engine calibrations.

Another change is reduced engine-idle speed. Arvan says it’s been reduced from 720 rpm to 640 rpm in the pickups. The van is able to idle at only 600 rpm.
All new engine controllers are needed to manage the sophisticated fuel and emissions system. Arvan says they have twice the number of calibrations as the previous LMM diesel to help the engine run as efficiently as possible across the widest range of operating conditions.

The oil pump is slightly bigger, plus there have been some minor changes to the crankshaft and pistons. Aluminum heads — a Duramax hallmark — remain. Engine weight is said to be comparable to the LMM engine.
Arvan also says fuel economy will remain the same — a key concern of any new diesel owner given the emphasis on clean emissions over operating efficiency.
What isn’t GM yet sharing about the 2011 Duramax? We still don’t know final power ratings for the HD pickups, and there are still a few surprises for a later date — like perhaps an integrated exhaust brake.
“We’re working on some things in that area [exhaust brake integration],” Arvan said. “We’ll see. It’s part of future discussions.”

We’re definitely looking forward to getting the new Duramax trucks and getting to see this new technology for ourselves.

Thanks to pickuptrucks.com for the info.