Buick has announced a new Buick Regal will join its line-up for the 2011 model year. After GM decided Buick would be one of its 4 core-brands, it became apparent that the brand would need more models to flesh out its showrooms alongside the Enclave and Lacrosse, and the Regal is its first addition. The Regal is based upon the Opel Insignia, which was recently voted Europe’s car of the year. The Buick version will slot into the lineup below the all-new 2010 Lacrosse, becoming the least expensive Buick for sale in Canada and the US.

The new Regal shares its Epsilon II platform with the recently redesigned LaCrosse, but the wheelbase is four inches shorter and 6.7 inches shorter overall. While the LaCrosse will soon add an available four-cylinder engine, the Regal will launch with only four-cylinders. The base engine will be the increasingly prevalent 2.4-liter EcoTec with direct injection. In Europe, the Insignia is available in a Sedan, Wagon, and a high-performance AWD speeder complete with a manual transmission.

The Buick Regal GS concept is being unveiled at the Detroit International Auto Show next week packing a turbocharged 2.0-liter four-cylinder engine. With output dialled up to 255-horsepower and 295-pound-feet of torque, the new Regal GS should easily eclipse the 60 mph mark in less than 6 seconds. The GS also sports an adaptive all-wheel drive system, with drive sent to all 4 wheels via a 6-speed manual transmission.Visual differences between the regular Regal and the new Regal GS are a lowered ride height, a discreet bodykit, 20-inch forged aluminum wheels, Recaro bucket seats with four-way lumbar support and cushion extensions, and a racing style steering wheel and metal pedals 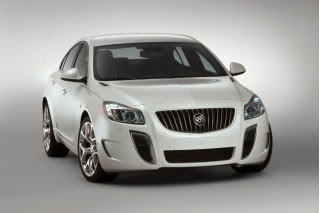 Only the premium CXL model will be available at launch, which is expected around the half-way point of 2010, with the turbo version being added next summer.

Let us know what you think of the new Regal, and Regal GS, in the comments section below.